Black, white, and brown. Some grey, some tawny, some striped. All engaged in activities ranging from a cat nap (hah) and a flight to the death (stop it, you’re not that funny).
I’ve never been good at decisions. Picking out a lunch special is a 15 minute ordeal that leaves the waiter checking back too often with that too nice smile and too sweet “Are we ready to order yet?”

But I scan the cats and like a fairytale or a night-time bar scene there’s one that catches my eye. Small and grey, it crouches in a corner. Its fur is patchy, one brown eye is shut and aside from its size there’s nothing about it that could be called “cute.” This is not the cat that will inspire your dinner guests to compliments or embellish your Instagram page with anything but pity.
“A runt, how adorable!” Anna says and my feelings for her are propelled from ambivalence to instant dislike. She continues through Colgate white teeth, “Gotta warn you though, she’s a biter.”

Twenty minutes and a $30 carrier later, the biter and I are in my Subaru and it’s (she’s?) kicking up a racket in the plastic cage. We drive down my neighborhood streets with much scratching, sharp protest and holding the carrier door shut for dear life. My apartment isn’t any variety of the word fancy but at least it’s cat friendly.
See also: HOA free.
See also: My neighbor’s monitor lizard, Charles.
See also: Cars that stop outside at all hours of the night.
Perhaps I should have gotten a dog.

Later that night, the biter and I face off by the food bowl.
“Eat your dinner,” I say.
“It’s real chicken, I swear.”
“Not real enough to me,” Her retreating behind declares.

We watch tv together, we sleep in my bed together, in the morning we listen to the news and the cause of last night’s sirens together. Ten year married couples wish for our level of security.
If I leave for work Biter waits by the bed. If Biter leaves through the kitchen window, I know she’ll be back soon. Often with a soon-to-be-dead mouse or two.
Except one day Biter is gone. For days and days and days. I search the streets with a food can, I comb the pounds around town. But Biter’s gone, she’s left me (for another man?).
At night, I lay in bed. Maybe it was the dry food, maybe it was the long work hours, maybe it was that I never bought that expensive cat tower. I swear off Purina, I put a pound of catnip by the window, I buy the tower and leave it in the middle of the floor, in plain sight.  The kitchen window I leave unlocked. Pushed open just enough, left just that far ajar (that far ajar, that far ajar) that should she have wanted to, she could have come home. Other cats find me but not her, of her there’s no sight, not her pink nose, not her one brown eye.
A lot of you may think these are extraordinary lengths to go to for a cat, but you don’t understand, it’s just that I’ve been left and left again. Was it too much to ask for someone to stay? Something? One cat?
Two full moons come and go. The catnip stays but Biter’s still gone.
Until she’s not.
It’s a day after work like any other. I crack open the door and see not one but four paws. That join to a cat, that’s lounging on one very expensive cat tower ledge.
She yawns. Like nothing happened. A look (just one) at my face. As if to say:
“I’ve been waiting forever.”
“You’ve been gone for HOURS.”
“Has it really been days?”

2 thoughts on “Midnight Cats and Capers” 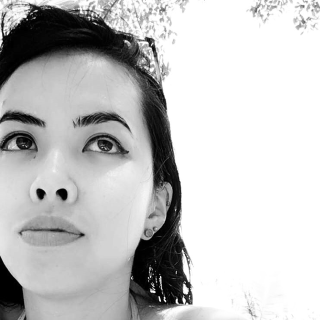 Bitt writes a lot. She's just trying to get better.